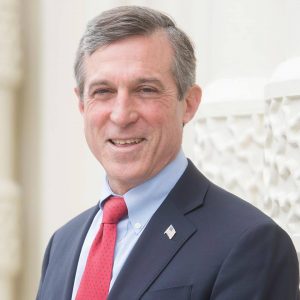 Born in Wilmington and raised in Claymont, Governor John Carney has been working for the Delaware people for more than 30 years. Governor Carney took office as Delaware’s 74th Governor in January 2017, focused on making Delaware’s economy more competitive, preparing Delaware’s children to succeed, and building a long-term sustainable financial plan for the State of Delaware. Working with Delawareans across the state, and with members of the General Assembly, he has made progress on each of those priorities. Governor Carney has directed new resources to high-needs schools, partnered with the private sector to drive new job creation, and taken steps to lower healthcare costs for Delaware families, businesses, and taxpayers.

Governor Carney began his second term Governor on January 19, 2021. Throughout the COVID-19 crisis, Governor Carney has attempted to balance the need for a healthy community with the need for a strong economy. Working with Delawareans, our communities, and Members of the General Assembly, Governor Carney remains focused on beating COVID-19, rebuilding our economy, making sure all Delaware children have an opportunity to succeed, and recommitting to a long-term sustainable financial plan for the State of Delaware.

From 2011 to 2017, John served as Delaware’s lone member of the U.S. House of Representatives. During his three terms in Congress, John worked with members of both parties to find solutions to the most important challenges facing the nation. He supported the revitalization of American manufacturing through the “Make It In America” agenda. He was a lead sponsor of the centerpiece of the Jumpstart our Businesses (JOBS) Act that made it easier for small- and medium-sized businesses to grow and create jobs. John also introduced legislation that was signed into law to prevent critical prescription drug shortages, and he was the lead sponsor on a successful bill to help veterans more easily enter the job market.

Prior to his time in Congress, John served two terms as Delaware’s Lieutenant Governor. Between 2001 and 2009, John developed the Lt. Governor’s Challenge to encourage Delawareans to live active, healthier lifestyles. He also created and implemented the Models of Excellence in Education program that allowed schools throughout the state to share best practices. In addition, John was a strong supporter of the Delaware smoking ban and he led the fight for a Cancer Right to Know law, ultimately passed in 2008. John also served as Chairman of the Delaware Healthcare Commission, the Criminal Justice Council, and the Delaware Science & Technology Council.

Under then-Governor Tom Carper, John served as Delaware’s Secretary of Finance and Deputy Chief of Staff. Before that, he was Deputy Chief Administrative Officer for New Castle County, and on the staff of then-Senator Joe Biden. In these roles, he helped Delaware earn its first ever AAA bond rating, played a key role in the state’s purchase of the Port of Wilmington, and worked to cut taxes nine times.

The second of nine children, John was born in Wilmington and raised in Claymont by his parents, Jack and Ann Carney, who were both educators. He attended St. Mark’s High School and led the school’s football team to its first state championship in 1973. After graduating high school, John attended Dartmouth College where he continued his football career and earned All-Ivy League and Most Valuable Player honors. When John returned to Delaware, he coached Freshmen Football on the staff of UD Head Coach Tubby Raymond while earning a Master’s Degree in Public Administration at the University of Delaware.

John lives in Wilmington with his wife, Tracey. They have two sons, Sam and Jimmy.

Sign up for weekly email updates from Governor John Carney.

Thanks for signing up!